Dr Gabarre is the first Spanish person to follow the teachings of Dr. Louis Corman and he has graduated from the society founded by him, attaining the grade of “Higher Diploma”. He was nominated professor of the French Morphopschology Society, a role he performed from 1996 until 2010 when he finished his role there, in the knowledge that the aforementioned society was being progressively undermined by internal leadership struggles after the death of Dr Corman. The society has been reduced to a small group of affiliates who no longer represent or contribute anything of note, they don’t investigate ways to promote and encourage morphopsychology within academic circles nor  in the world of education, nor in the integral psycho-physical development of the child, or the growth and development of the individual or in providing new solutions for behavioural and psycho-pathological disorders, for couples, for violence towards women and in the world of business.

Born in Granen (Huesca), he has had a rich and varied work experience, starting at the age of nine when he looked after cattle then moving to Barcelona at the age of fifteen where he combined his work as a labourer, salesman and administrative work with a regime of study in the evenings. At 21 he was contracted for the role of deputy head of personnel at Glucosas y Derivados, S.A. a company with over 600 employees, at 23 he showed his maturity by securing the post of head of personnel at Solis Color S.A. where he was responsible for over 300 staff, a role he performed with great success for 6 years. He then became director of personnel for the Grupo Hospitalario HHSCJ, a group of six different hospitals, where in the space of six months he was given  top level executive responsibility, a role he performed for the next 18 years achieving the best economic results in the hospital sector in the whole of Spain and optimum efficiency and patient care quality, applying his comprehensive knowledge of the individual and their innate abilities, utilising staff in areas where they are most competent whether they be active, patient, thrifty. Using empathy and support for the patient to aid the physical rehabilitation of the patient and consequently minimising the length of time spent in hospital. This comprehensive knowledge also served him very well when dealing with trade union representatives and the public health authorities.

Fourteen years ago he turned his Morphopsychology surgery into a private business dedicated to investigating and researching the face and the mind teaching the science of morphopsychology.

He is founder of the Instituto Superior de Morfopsicología.

During the 18 years in which he was a senior executive of the hospital group (5 of these were psychiatric hospitals and 12 were psychiatric out patient facilities  consisting of primary mental healthcare centres for children and adults) he studied morph psychology both implementing and verifying these practices  in collaboration with psychiatrists, psychologists and psychotherapists, though copious testing, that the face and the soul (psyche) are two sides of the same reality, which in turn validates the findings of the French psychiatrist Dr. Louis Corman, the creator of morph psychology.

Having made these findings through years of study, them applied it while collaborating with many different businesses.

He serves as a consultant for marriage and pre-marriage guidance, for professional and career guidance, on how to make studying easier for children and how to achieve better grades, as a mediator in all types of conflict-group and individual- and for treating patients with behavioural disorders, all with spectacular results. He consults with various businesses on the selection, evaluation, configuration and cohesion of teams in order to maximize their performance and efficiency.  Transversal Coaching to achieve maximum success in work, relationships and socially. He regularly appears on television, radio band printed media in his role as a consultant.

“He is considered one of the foremost experts in the world” Victor Antonio Campoy, DSALUD magazine 20 September 2000,  “He is considered one of the best in this (field of morph psychology) in the world” Victor Amela, Vanguardia newspaper 15 April 2002. “The worlds leading expert” Dolors Massot ABC journal 09 April 2004, “Considered one of the worlds leading experts” Sebastian Moreno Tiempo magazine23-29 May 2005, “One of the worlds leading authorities” Anna Ma Ortiz, El Mundo magazine 23 July 2006, “Worlds foremost authority in this field” Gaspar Hernandez El Periódico 18 July 2010, “Emminent morphopsychologist and worlds leading authority” Alba Aguillon, Alto Aragon 19 September 2010, page 5 supplement, “Today we can declare his theories to be true……what matters are the results and they exist”. “I have witnessed in the past how various people unknown to him, have been impressed by Dr Gabarre’s analysis and conclusions and it’s high degree of accuracy in his diagnoses” Jose Ramon Til Aisa, Vice President Asociación Espanola de Dirección y Desarrollo de Personas (AEDIPE) El Rostro y la Personalidad 4th Edition page 468. 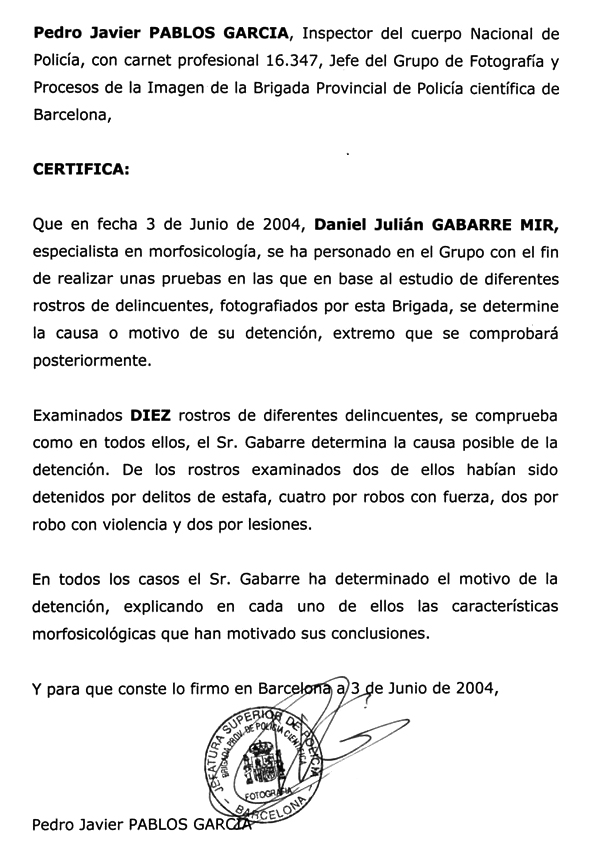 During a 2 year investigation, 1014 people all of whom shared a specific morphology (consistent with being non co-operative, self reliant and difficult to delegate) were asked to participate, however, as expected by virtue of their morphology, of the 1,014 who finally did participate, all demanded payment for their contribution. In contrast, a further control group of 30 people with an opposite morphology to that of the other 1,014 all participated in an altruistic manner, again as expected by the morphopsychologist. This reflects the in depth knowledge and high level of precision in the behavioural diagnoses of Dr.Gabarre, one of many reasons why this research was rewarded the title PhD Psychology with highest mark possible, a unanimous “Excellent Cum Laude” from the Universidad Autònoma de Barcelona.

This expertise and knowledge was confirmed by the head of Photography and image processing of the scientific arm of the Barcelona Police department, as shown in the report below:

Notice:
This experiment was carried out in order to verify the findings of Julián Gabarre, however, with Morphopsychology we can’t determine whether the person walking down the street will commit a crime or not. We can only see the natural tendency. In other words, if this person were to commit a crime what’s most probable is that he would commit the crime indicated by his natural tendency. Nevertheless, a person can have a natural tendency but if “the environment” doesn’t drive him to it , he will not commit this type of  crime, for which we must abstain ourselves from judging in this sense. The photographs of the people which were shown to the Head of the Photography and Image Process Group were of individuals that had been judged and were serving their sentence. I was lucky that all had performed the natural law of predisposition, but there is an infinite amount of people in the world that have the same tendencies and will never commit a crime as “their environment” didn’t push them to it. Nevertheless, as can be seen, precision Morphopsychological diagnosis for the comprehension of personality is by far superior to any other method known to man.