What does Donald Trump’s morphology say? 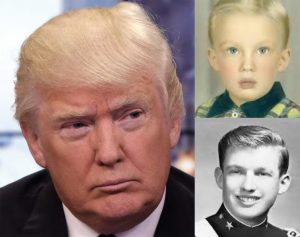 In order to make a full study on Donald Trump’s current face, since we can not see his forehead, we need to take a look at old photos, when we could.

We see a large upper face, angled, with tiny eyes, tonic – somehow protected – and superficial imitating the keel of a boat.

The emotional area between his malar bones is narrower than the mandibular area between his mandibles, in the wider side of them. This are is plain and the nose has retracted from the  nostrills, which makes it smaller compared with the whole face.

The mandibular area has been developed enough and it is quite fleshy (normal at his age); small mouth and significant chin.

This structure shows that the imagination is remarkable, full capacity to see and give global solutions. His own ideas are very selective but he does not renew them frequently. They are always directed to go right to the top of power at any price because there is an excessive, calculating and cold ‘Super-Ego’, that he will use coercively. There is a lax morality and a lack of prosocial feelings, thus the end justifies the means.

This, alongside with his unconscious desire to reinforce himself, informs about a non-permeable and incapable of delegating structure, thus, of creating work-teams.

It is a structure with a lack of empathy and lonesome that shows boredom for conventional attitudes and social relationships.

This same structure indicates that there is an incapacity for love and affection because he is not made for love, but for ownership and feeling better than anyone else to satisfy his vanity and selective sexual appetite, because his libido clearly is clrearly improvable.

However, this same parameters will make his partner perceive him as a boring person and they will just submit to him because that is what should be done. His means are not to make people happy, but submit and possess them. It also indicates pride, vanity and a very high self-esteem.

In the same way, it shows impulsivity, thus, quick and not well-thought-out ideas. There is not much capacity to expect the unexpected. It also shows anger, pride and revenge in case he does not achieve what he wants because he has a very strong will to do it.

His leadership style is bossy, dictatorial and coercive.

The person who owns this structure, if they are aware of it, could improve these perfectible aspects and improve their future, and the other’s future.

I notice that if a person with this morphological structures (stiff, improvisers and narcissistic) accumulates too much power, experience says that are common in dictators, such as Hitler, Lenin and Mussolini, from whom we do not have good memories (even if there were no facial features of selfishness and emotional coldness in them).

4 thoughts on “What does Donald Trump’s morphology say?”